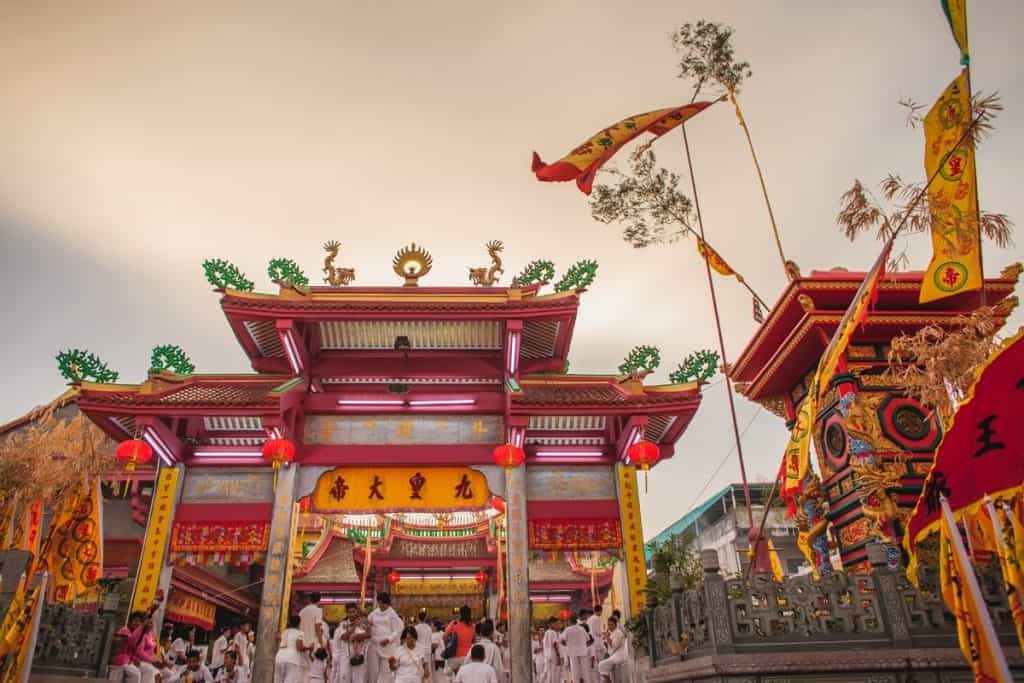 Phuket Vegetarian Festival is the annual nine-day event, celebrated by the Chinese Hokkien descendants across the island for the purposes of physical well-being, spiritual cleansing, merit-making, conferring good luck in the future, and ensuring prosperity and long life.

The most significant festival in Phuketian culture, Phuket Vegetarian Festival, is celebrated in the ninth Chinese lunar month, which this year falls on 29 September – 7 October 2019.

The history and origin of the festival

The Vegetarian Festival started about 150 years ago in the Kathu district, where the majority of the Chinese tin mine workers were settled in Phuket. They formed such a large portion of the community that a group of Chinese opera performers were hired to entertain them and their families. During the Chinese ninth lunar month, Phuket was hit with an epidemic of a fatal disease and the loss of many lives. The Chinese performers were also falling ill.

Eventually, they realised they had forgotten to pay homage to the Nine Emperor Gods (Kiu Ong Iah) in the first nine days of the month. Thus, one of the performers was sent to China to invite the Kiu Ong Iah to Phuket. The next year the Chinese followed the tradition of refraining from eating meat, drinking alcoholic drinks, engaging in sex, quarreling, telling lies or killing. The epidemic ceased, and, every year since, the people of Phuket have continued to celebrate the festival. Visitors are perhaps most impressed with the spectacle of people, ostensibly possessing by gods, piercing their tongues, cheeks, and other parts of the anatomy with sharp implements. Adepts apparently feel no pain, and show little no sign of real injury.

1. Consuming foods that consist of vegetables, except for pungent kinds such as garlic, onions, coriander and flowering garlic chives.
2. Praying and taking refuge.
3. remaining in a state of peace and calm.

Things to avoid during the 9 days of festival

1. Abstain from eating meat and killing living things.
2. Abstain from stealing.
3. Abstain from sexual behavior.
4. Abstain from telling lie.
5. Abstain from alcoholic drinks.
6. Abstain from gambling.
7. Abstain from bedecking jewelry and leather goods.
8. Avoid wearing other colors of attire to enter the principle hall of the shrine, except white attire.
9. Mourner, woman in menstruation and pregnancy should avoid participating in any kind of rituals.
10. Kitchen utensils and containers should be kept solely for vegetarian during the festival.

The vegetarian food can be found where yellow flags fly. Highlights also include Ranong Road in Phuket Town, where a stretch of yellow flag road filled with hundred of vegetarian and vegan restaurants and food stalls.

Celebrations will be taking place at all 25 shrines across the island. Some of the biggest celebrations are held at Bang Neow Shrine, Jui Tui Shrine, Kathu Shrine and Sui Boon Tong Shrine. Thousands of participants are expected to turn up to the street procession rituals in Phuket Town during the last three days of the festival, which features the firecrackers and self mutilation by spirit mediums.

If you plan to visit Phuket during the vegetarian festival and want to enjoy the street processions, fire-walking and bladed-ladder climbing rituals around the island, check here for the complete schedule including venues, dates and times.

A few meters from Patong beach. All renovated. FREEHOLD

New project from one of the largest developers on the…